Results from the citizens’ validation of scenarios

Future scenarios are “carefully constructed snapshots of the future and the possible ways a sector might develop”. Typically, they take the form of a one-page text describing a plausible story about the future. Nowadays, several regional authorities develop them to portray the critical strategic issues that the region faces and to plan for a sustainable future. In the frame of RRI2SCALE, several such scenarios were developed to support our four pilot regions (i.e., Vestland, Overijssel, Kriti, and Galicia) in their strategic planning. In particular, six scenarios were developed, two per focus domain (i.e., intelligent cities, intelligent transport, and intelligent energy), with the first scenario built on the assumption of “Rigid regional innovation policy & Low level of citizen participation”, while the second one on the assumption of “Adaptive regional innovation policy & High level of citizen participation”.

After developing scenarios and before committing to policy action, regional authorities typically want to ensure the scenarios’ logical consistency and ability to serve as strategic insight and foresight tools. To this end, they organise scenario validation processes, where a heterogeneous group of people discusses and potentially opposes the scenarios. In the RRI2SCALE frame, a similar validation process took place digitally in June 2021. The scenarios were initially transformed into videos to minimise “participant fatigue”. Then, the videos, along with a questionnaire, were shared with citizens of the focal regions through the RRI2SCALE website, social media, and email. In parallel, citizen deliberation was facilitated under dedicated social media posts. If you want to check the visualised scenarios per region, visit the respective section.

The RRI2SCALE campaign reached more than 31,000 people. Almost half of them (about 13,000) watched the videos, more than 2,000 people clicked on the survey link, and finally, 279 valid replies were received. Among the people who clicked on the survey link, 60% were male, while most (about 62%) fell within the age of 45-64 (see Figures 1 and 2). Among 279 valid replies received, 114 replies were received from Galicia, 93 from Kriti, 37 from Vestland, and 35 from Overijssel. From another perspective, among the 279 valid replies received, 92 replies refer to the Intelligent Cities scenarios, 104 replies refer to the Intelligent Transport scenarios, and 83 replies refer to the Intelligent Energy scenarios (see Figures 3 and 4). Finally, it is worth mentioning that 386 comments were received through the questionnaire and under Facebook posts.

According to the replies received, most people are rather pessimistic about life in their region in 2031 since they find the first scenario more probable than the second (see Figure 5). Moreover, people appear to be concerned about their future emotional state and health, their future employment status and working conditions, and the impact of climate change on the younger generations’ lives (see Figure 6). The validation outcomes were analysed, and the scenarios were adjusted to reflect better high-quality scenario criteria defined in scientific practice, such as plausibility, the difference from one another, completeness, and internal consistency. 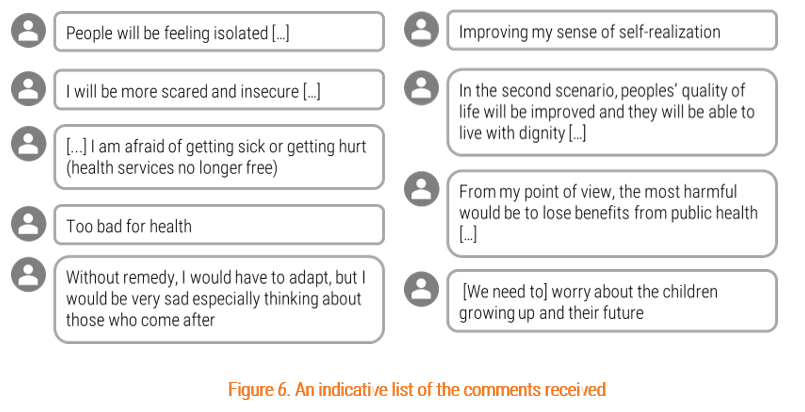